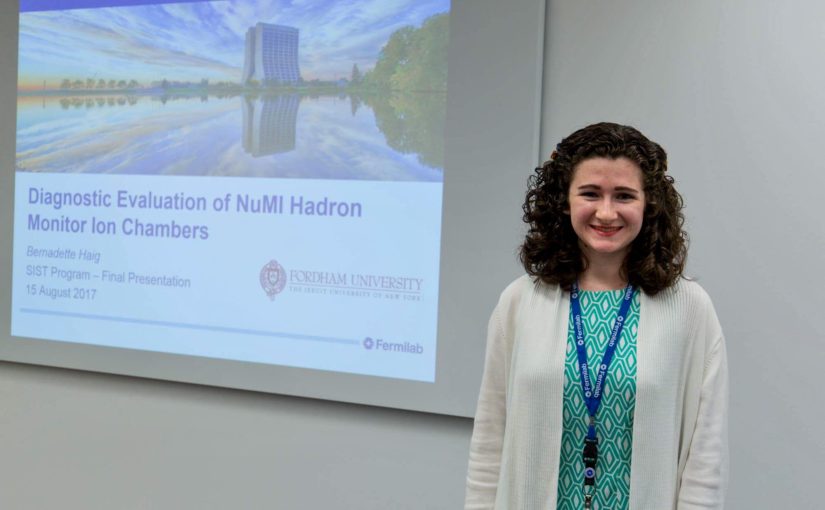 Bernadette Haig is a Rose Hill Honors senior with a double major in Engineering Physics and Classical Civilizations. A woman of motivated curiosity with a clear love of learning, Bernadette has participated in many research projects in different areas of physics, while also studying Latin, Greek, and the ancient world. I had the opportunity to speak with Bernadette about her double major, her experiences inside and outside of Honors, and her plans for after graduation.

Continue reading for an in-depth interview with Bernadette!

M: What made you decide to pursue a double major?

B: What really got me into the Classics major was the Honors Program.  Professor McGowan taught my first class in the Honors Program at 9:30 in the morning in Alpha House, Ancient Lit, and he just so clearly loved what he was teaching; that was probably one of my favorite [classes.]  He said that I should consider a minor in classics and I thought, “Well, why not!”  So I started taking a couple classes. Second semester freshman year I took Roman Art down at the Lincoln Center and loved it, and then sophomore year rolled around and I took a couple of classes in Latin and thought, “Wow this is amazing, I’m going to keep taking this!”  The classes started to add up and I had wanted to take Greek too because it was just on this strange bucket list of things I want to do over the course of my life – learn a little bit of Latin and Greek. By the time I got into junior year, I started Greek, kept taking Latin, and took the study abroad class Ancient Roman Cities. At that point, my advisor told me I was close to finishing a major so I decided to complete the requirements.

It’s been a lot of fun; it’s something different.  Obviously I adore physics, that’s what I’ll be doing with my life I hope, and I will probably never come back to this again in a concrete way. But I’ve just so enjoyed it — tackling ancient texts just for the purpose of doing so.

M: What is your favorite thing about the Honors Program?

B: I would say my favorite thing about Honors as a whole is the breadth of the curriculum because I’ve been exposed to things in Honors that I know for a fact I would never have taken on my own.  Even first semester taking art history, art was so not my thing, but the more we started to be in the class and learn about what art history really was, the more I started to love how peoples’ cultures are reflected through their art – their values, their customs – and how much you could learn from reading art if you knew what you were doing.  But I never would have taken that on my own, and [the same goes for] the few philosophy classes that I’ve taken through the Honors program – not that I don’t find them interesting, but as a physics major I probably never would have taken [these classes] on my own if I didn’t have to.

What I also love is the critical environment.  If you blurt something out in a seminar class, you better be ready to defend it.  You can’t have a half-formed opinion, which is kind of frustrating but also for me I’ve found that it forces me to have really fleshed out ideas, and that has carried over even outside of the Honors Program.  I find myself wanting to really engage with my own opinions critically, and this is something that I’ve really found to be beneficial.

M: What was your favorite internship/research project you did during your time at Fordham or one that taught you a lot?

B: The two major projects that come to mind are the ones that I’ve done this past summer and then the summer before.  The summer before my junior year I was here at Fordham doing research in the physics department and we were using Raman spectroscopy to look at cancerous tissue compared to healthy tissue to see if the signature looks different in healthy tissue as opposed to cancerous tissue.  We were working with Mt. Sinai Hospital in Manhattan and they essentially gave us people’s cancers to study.  They wanted to include the project that we were developing into a surgical robot so that if they were going to do robotic surgery, they could check to see that the margins were clear to make sure they removed all the cancer, and do that without excising the tissue and sending it to the lab; they have to do that all while the patient is still under anesthesia and it takes about 45 minutes.  So we developed a new probe that was much more precise than some of the other [tools] that my professor had worked with in the past.  That was really exciting because this was my first experience with “real” research, working on something that was going to matter.  Our research is going to be published in a journal called Review of Scientific Instruments and so the probe that we developed is really the focus of the research so that will be really cool; I don’t know when it will be published but it is still really exciting.

This past summer I was doing completely different work out at the Fermilab in the Chicago area.  It’s a particle physics lab and I was working on a piece of equipment in their neutrino beam line that was malfunctioning.  Basically I got there and they said to me, “Your project for the summer is going to be to figure out why this thing is not working and what we should do about it.”  It was a really cool project and I got a lot of training and got to go down into the ground 300 feet underground to work on this piece of equipment.  In order to look at it and install what we needed I had to take a huge elevator down and it was really exciting but also very frustrating because I had to deal with a lot of real workplace issues, like my supervisor was not the most helpful person and would sometimes disappear or did not know the project very well because he was new to the department.  Everyone was very nice and it was a great place to work because of the general atmosphere, but I did encounter a lot of those logistical issues. I would say that those taught me a lot about working in general outside of academia, which was again really frustrating but really cool.

Neither of those projects are in fields that I will be going into, so it has been neat to do research that’s a little outside of where I want to go because I will probably never get that chance again.

M: How do you think Honors has influenced your opportunities and decisions throughout college?  Is there anything that you learned in Honors (information or a skill) that you have seen specifically come into play in your non-Honors/work experiences thus far?

B: I would say the critical thinking has been the biggest chance that I’ve seen in myself in terms of when I evaluate myself as a student.  Being more critical about the information that I’m hearing or the things that I’m working on, and not just accepting things at face value and if I have an opinion formulating it really carefully and making sure that it’s something that I really do believe as opposed to something I’ve just always assumed.

I don’t know if I’ll ever come back to all of the interests that I’ve developed through Honors, but like I said about Classics, it’s been really great to just do something for the fun of it.  I’ll probably never come back to Latin or Greek, which on the one hand is kind of sad, but on the other hand has been really, really neat. I feel like that has made me a more curious person.  The fact that I have been exposed to all of these different things and found them very interesting everywhere I’ve gone has made me more inclined to try new things.  I knew coming into college I wanted a broader undergraduate experience and that I wanted to be exposed to things outside of my own field and so Honors has honestly been perfect for me – it’s everything I could have ever wanted out of a college experience.

B: I’m going to graduate school for a Masters degree in aerospace engineering and right now the best offer on the table is Stanford – I’m still waiting to hear back from a couple of other schools but I’ll be going out to visit Stanford next week and they have a lot of cool projects going on there.  They have an aerospace robotics laboratory, which is everything I could have ever wanted; it has my name written all over it.  But like I said, I’m still waiting on a couple of other schools so I just want to evaluate all my options and go out and visit to see the environment and make my decision based upon those factors also.

There are certain things that I’m a little worried about leaving Fordham — I’m really involved with Campus Ministry and I have experienced so much personal spiritual growth through that ministry so I’m a little concerned about what will happen to that part of me when I leave Fordham.  I will obviously miss Fordham a lot; it’s been such a great place for me and has ended up being exactly the place I needed to be.  I’m sure I won’t be gone for good!